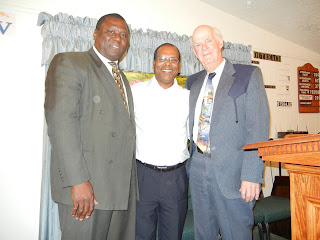 Our Church was blessed last night with the teaching of Bro. Chacko from India. He testified about his experience with being a Pastor in India and told us why he believes that with Jesus, “All Things are Possible”.
He started by telling us a story about someone who was ridiculing him for being a “Jesus Only” person. He told them that if you are not “Jesus Only” then that makes you “Devil Only” because the Bible says there are only two, the God of Heaven, and the god of this world. If you are not associated with the God of Heaven, that leaves only one alternative.
Matthew 2:11
11 And when they were come into the house, they saw the young child with Mary his mother, and fell down, and worshipped him: and when they had opened their treasures, they presented unto him gifts; gold, and frankincense, and myrrh.
Notice the word “him” in this verse. They didn’t worship Mary or Joesph, but they fell down and worshiped Jesus.
Bro. Chacko also testified about how his first Church building in India was torn down by unbelievers. He could not retaliate because that’s not the way a Christian should act. Instead, he went on a 21 day fast. At the end of the fast, the man who led the effort to tear down the building knocked on his door and apologized for his mistake. He then rebuilt the Church and even added some rooms on the top to serve as a private residence for Bro. Chacko and his family. All things are possible!
John 16:21
21 A woman when she is in travail hath sorrow, because her hour is come: but as soon as she is delivered of the child, she remembereth no more the anguish, for joy that a man is born into the world.
Bro. Chacko told us that after so many years in the ministry, he can look back now at his 52 Churches, and can’t remember the anguish it took to establish these works. He also has an orphanage with 64 boys and girls that was mainly funded by a believer in Waco, Texas. The gentleman gave him a donation that was so large, he was unable to receive it by law. It is nearly impossible for a Christian Church in India to be granted permission to receive large sums of money from foreign sources, but he was granted that right only one month after applying for it. Again, with Jesus, All Things are Possible!!
If you would like to sponsor one of the children at the orphanage, please contact Calvary Apostolic Church, and we will put you in touch with Bro. Chacko. A donation of only $50/month will pay all expenses for one child.
Previous
God Wants to Bless Us
Next
Tests and Trials