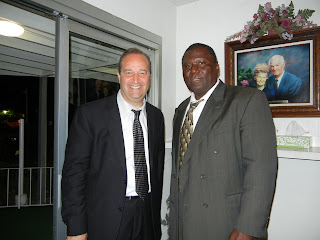 If you’ve ever heard Brother Platania teach, then you know how educational and rich his messages are.  Following are the message titles and scripture references from the revival that we held with him at Calvary Apostolic Church on April 28-30, 2011.  To listen to audio from each night, just click on the title.

Deuteronomy 11:8-12
8 Therefore shall ye keep all the commandments which I command you this day, that ye may be strong, and go in and possess the land, whither ye go to possess it;
9 And that ye may prolong [your] days in the land, which the LORD sware unto your fathers to give unto them and to their seed, a land that floweth with milk and honey.
10 For the land, whither thou goest in to possess it, [is] not as the land of Egypt, from whence ye came out, where thou sowedst thy seed, and wateredst [it] with thy foot, as a garden of herbs:
11 But the land, whither ye go to possess it, [is] a land of hills and valleys, [and] drinketh water of the rain of heaven:
12 A land which the LORD thy God careth for: the eyes of the LORD thy God [are] always upon it, from the beginning of the year even unto the end of the year.

Date: Friday, April 29
Title: I’m Coming Out Of This

Acts 12:7-11
7 And, behold, the angel of the Lord came upon [him], and a light shined in the prison: and he smote Peter on the side, and raised him up, saying, Arise up quickly. And his chains fell off from [his] hands.
8 And the angel said unto him, Gird thyself, and bind on thy sandals. And so he did. And he saith unto him, Cast thy garment about thee, and follow me.
9 And he went out, and followed him; and wist not that it was true which was done by the angel; but thought he saw a vision.
10 When they were past the first and the second ward, they came unto the iron gate that leadeth unto the city; which opened to them of his own accord: and they went out, and passed on through one street; and forthwith the angel departed from him.
11 And when Peter was come to himself, he said, Now I know of a surety, that the Lord hath sent his angel, and hath delivered me out of the hand of Herod, and [from] all the expectation of the people of the Jews.

Luke 10:25-37
25 And, behold, a certain lawyer stood up, and tempted him, saying, Master, what shall I do to inherit eternal life?
26 He said unto him, What is written in the law? how readest thou?
27 And he answering said, Thou shalt love the Lord thy God with all thy heart, and with all thy soul, and with all thy strength, and with all thy mind; and thy neighbour as thyself.
28 And he said unto him, Thou hast answered right: this do, and thou shalt live.
29 But he, willing to justify himself, said unto Jesus, And who is my neighbour?
30 And Jesus answering said, A certain [man] went down from Jerusalem to Jericho, and fell among thieves, which stripped him of his raiment, and wounded [him], and departed, leaving [him] half dead.
31 And by chance there came down a certain priest that way: and when he saw him, he passed by on the other side.
32 And likewise a Levite, when he was at the place, came and looked [on him], and passed by on the other side.
33 But a certain Samaritan, as he journeyed, came where he was: and when he saw him, he had compassion [on him],
34 And went to [him], and bound up his wounds, pouring in oil and wine, and set him on his own beast, and brought him to an inn, and took care of him.
35 And on the morrow when he departed, he took out two pence, and gave [them] to the host, and said unto him, Take care of him; and whatsoever thou spendest more, when I come again, I will repay thee.
36 Which now of these three, thinkest thou, was neighbour unto him that fell among the thieves?
37 And he said, He that shewed mercy on him. Then said Jesus unto him, Go, and do thou likewise.